Zante, the flower of the East.
Zákynthos (Zante) is a green island endowed with fertile valleys, a mild climate, and a 123 km coastline.

Its landscape diversity has resulted in different types of beaches as there are sandy beaches in secluded coves where the tranquil waters are deep blue on the island’s southeastern part and others with rugged cliffs and an interesting underwater world to the western part of the island.

Historical
The Venetians, who ruled Zákynthos from 1484 to 1797, called the island “Fioro di Levante” (flower of the East) as there are over 7,000 species of flowers on Zákynthos. The third-largest island of the Ionian Sea, after Corfu and Kefaloniá, is internationally known as “Zante”. Zákynthos is said to have been the island’s first inhabitant and the ancient acropolis is attributed to him. He was the son of Dardanos who ruled the ancient kingdom of Frigia. A Venetian fort was built at later times on the site.
The Venetian architectural influence has left its stamp on Zante despite the damage sustained due to the seismic activity in the area. After the ravaging 1953 earthquake and the ensuing fire, a number of historical buildings and churches burned to the ground. Consequently, the significant treasures these buildings were housing perished. The town was rebuilt according to a plan where strict anti-seismic specifications applied and, to a large extent, respecting the town’s former architectural structure.

On Zante, great care is taken to protect two endangered animal species, namely the Caretta Caretta sea turtle and the monachus monachus seal.
The city of Zakynthos is the capital of the island and at the same time the island’s port.

Interesting sights around the city to visit 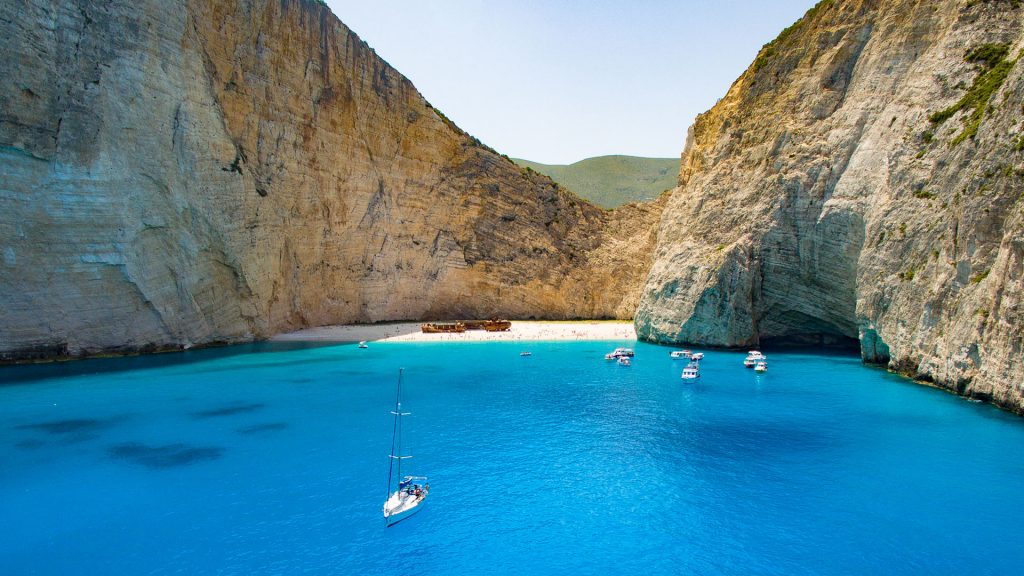 Zakynthos Shipwreck or Navagio Bay.
The beach of Navagio or Shipwreck cove (accessed only by boat) is the most famous beach of Zakynthos lying on the western side of the Ionian island, close to Anafotiria village. The Shipwreck is one of the most photographed sights in Greece. It is considered one of the most beautiful beaches in Greece. It was initially called Agios Georgios but owes its new name to the shipwreck of a boat that transported illegal cigarettes, in 1983. The ship was washed ashore.
With the years passing, the sand completely surrounded the ship which looks now as it emerges from it. The vestiges of the ship can be seen in the middle of the large white sandy beach which has amazing turquoise and crystalline waters. Huge vertical cliffs of white rocks are surrounding the sand creating a unique and enchanting image. To reach this paradise, one has to take a little boat from the small port of Porto Vromi. These taxi boats are leaving every hour and the trip is about 30 minutes.