History of Monemvasia
This imposing mass of rock that looms above the Laconian coastline is linked to the mainland by a narrow causeway and a 130 metre long bridge, to which the town owes its name (“moni emvasi”which means “only access”). The rock is 1500 metres long, 600 metres wide at its widest point, and is almost 200 metres high. The top of the rock is flat, forming a sloping plateau surrounded by steep cliffs falling to the sea.

There are two fortified settlements, invisible from the mainland – the Lower Town (7,500 square metres) and the Upper Town (120,000 square metres) situated on the plateau at the top of the rock. The soil is mainly rocky, arid and sparsely vegetated. This has had a decisive effect both on the architecture of the settlements and on the building materials used – an abundance of stones for building houses that all had their own reservoirs to collect rain, the only source of water.
First settled 8,000 years ago, Monemvasia was the only Proto-Helladic settlement on the eastern coast of the region of Epidaurus. Then known as Cape Minoa, it was a port of call for those sailing between mainland Greece and the fast-developing centers of the Cyclades and Crete. During the Mycenaean and Late Helladic periods, Monemvasia continued to be an important crossroad between the Mycenaean and Minoan cultures.

A powerful earthquake in 375 AD radically changed the region’s geomorphology, cutting off the promontory from the mainland, forming the island of Monemvasia. The Laconian coast, particularly in Epidaurus, subsided and many historically important towns such as Plytra, Asopos, Vies and Epidaurus Limera were partly or totally submerged. In Monemvasia, this subsidence occurred at the edge of the rock and only on its western side, which was covered by the sea, transforming what Pausanias had described as a long and narrow promontory into an islet.

Laconians first settled there in 582/583 AD, fleeing from incursions by Arabs and Visigoths from whom it provided refuge due to its coastal, inaccessible nature that lended itself to fortification. The first settlement at that time was in Goulas or the Upper Town. The first bridge connecting the rock to the mainland was also built then.
During the Byzantine period, when its defences were completed, the town’s geographically strategic position made it an ideal base for military operations. The Byzantine state declared it an administrative centre for the imperial lands in the Peloponnese. Additionally, it was a religious centre and also functioned as a base for the Byzantine fleet’s battles with the Arabs. The town flourished as a naval and merchant hub, resulting in the development of the Lower Town on the southeastern side of the rock, shortly after 900 AD.
Throughout its history, Monemvasia was fought over by powers who realised its geopolitical importance. Its fate was entwined with the sphere of influence of the prevailing Great Powers, which over the centuries have included Franks, Byzantines, Venetians, the Pope, and Turks. Its inhabitants, throughout the ages, have maintained their identity, a relative autonomy and their privileges.

In 1204, when the Franks conquered the Byzantine state, the Peloponnese put up a strong fight, particularly Monemvasia which remained undefeated for over 40 years. The conquest of the rock became a question of honour for the Frankish knights who, realising that the inhabitants could not be defeated by force of arms, decided to starve them into submission. This resulted in a three-year siege by land and sea. Even then, when they had reached the limits of their resistance, they managed to wrest conditions for their surrender to the Franks. These included their freedom, exemption from taxes and from military service in the conquerors’ armies. 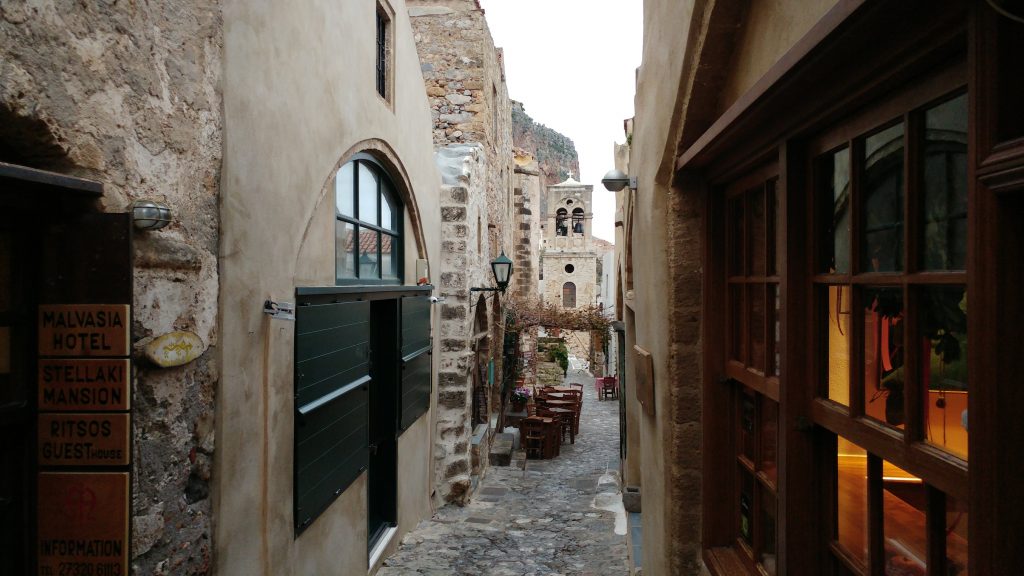 The Byzantine empire soon recovered however Monemvasia was liberated and excluded from customs duties on local goods, tax and they acquire free movement of Monemvasia’s ships throughout the empire. The 13th and 14th centuries became known as the town’s golden age. The number of inhabitants rose to 8,000 and there were 40 churches. The limited space gave rise to dome-shaped rooms; even the streets were built over. It was home to several Byzantine emperors. John Cantacuzene, the son of Monemvasia’s governor, was crowned emperor of Byzantium in 1341 AD.

A flourishing maritime trading tradition facilitated the export of the renowned local wine known as Malmsey or Malvoisie (Vinummalvasium), a luxury product sought after by rulers and royalty. The wine was produced from the sweet, reddish-white thrapsa grape by local vintners, and was known and esteemed since antiquity. It was referred to by Shakespeare in “Richard III”. However, the exact way it was produced is no longer known as the Turks banned it in 1545.
In 1463, Monemvasia had been the last Byzantine stronghold to fall and on July 23, 1821, it was the first Greek fortress in the Peloponnese to be liberated by Greek independence fighters, an event of decisive importance for the struggle against the Turkish occupation as it gave a tremendous boost to morale. Monemvasia had returned to Greek rule after 358 years of foreign occupation under the Venetians (1463-1540 and 1690-1715) and the Turks (1540-1690 and 1715-1821).

After the liberation, fighting between rival factions for control of the fortress led to its decline and depopulation. After 1828, it became a provincial center in the newly formed Greek state. In the early 20th century, many of its inhabitants abandoned the Lower Town for the new settlement, Gefyra, that sprang up across the bridge on the mainland.